One of the oldest working theatres in Serbia, the National theatre is located in the very center of Belgrade, in Republic’s square. It stands in the place where the famous ‘Stambol gate’ used to be and it includes opera, ballet and drama. The story of this theatre’s opening is a long and winding one – the first efforts began as early as 1842 (at which time it was no more than an idea) and they were finalized when the theatre opened in its current location in 1869 with heavy personal assistance and involvement of prince Mihailo Obrenovic himself. Today the theatre has two halls for performing arts: the main stage which is a grand hall on three levels. This is where operas, dramas and ballets take place. The second one is the Rasa Pavlovic stage used mainly for smaller scale dramas.
All kinds of performance arts are nurtured by the National theatre. The visitors can enjoy operas, ballets, plays and other performances. It is worth noting that the Opera of the National Theatre is a very old Opera ensemble with a tradition reaching back to 1919.

The theatre had always represented an important staple in the city’s history and culture and it is a comforting, familiar place to the people of Belgrade. During some of the hardest times in Belgrade’s history, such was the NATO bombing, the theatre had opened its doors to the people, arranging nightly performances for a meager price of 1 dinar per person (1 dinar being the smallest currency in use in Serbia). 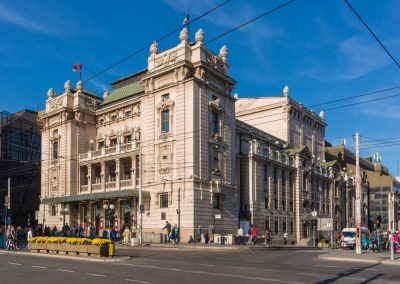