The ‘central’ square of Belgrade and its most famous meeting spot hands down. It is the point where many of the city’s most famous location connect – it’s right off the main pedestrian area of Knez Mihailo street which leads straight to Kalemegdan, it’s right next to the Museum of Belgrade, it’s across-the street from the National Theatre, the famous “Horse” (Prince Mihailo monument) sits right in its center, it is where many of the city’s bus and trolley lines intersect and in general a very, very busy and lively place.

The square as it exists today was built right after the original Stambol gate was demolished in 1866. While it was a beautiful and monumental construction, built by Austrians and reputed as the most beautiful gate in Europe at the time and an important point where paths to Istanbul (then Tsargrad) crossed, the gate was also a symbol of oppression for the Serbian people and it was torn down the moment they had the authority to do so.
Prince Mihailo Obrenovic ordered the gate to be demolished and replaced with the National Theatre building in a symbolic act where the symbol of oppression was replaced with a symbol of progression. Still, even after the initial square was built in the place of Stambol gate, the area remained neglected for a long time. The concentrated urban development there began with the erection of the famous monument to prince Mihailo.

Needless to say it is surrounded by cafes, restaurants and shops. If you’re agreeing to meet someone somewhere in Belgrade, it’s an eighty percent chance the meeting place will be ‘by the Horse’, in Republic square. There is no way you can visit Belgrade without ending up here one way or another. 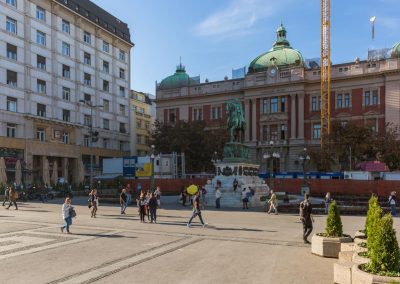 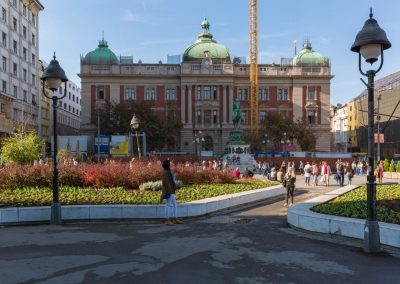 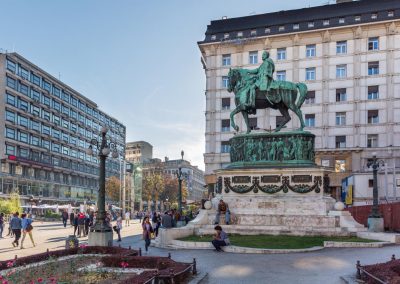