This lovely old chapel stands in the so-called Lower-town area of the Belgrade fort, near the famous ‘miracle’ water spring. The church was built by an unknown benefactor around the same time when the remains of St. Petka were relocated to Belgrade and the construction was completed on St. Petka’s day, a popular religious holiday in Serbia. The most famous feature of the chapel is the spring of holy water that runs nearby. People from all around Serbia travel to Belgrade in order to have a drink of water from this spring which is said to refresh the spirit and help with ailments. Most famously it is said that the water is beneficial to women (as St. Petka is patron-saint of all women) as well as that washing one’s eyes with the water from this spring helps with many sight-related problems.

Beautiful mosaics adorn the arches of the church’s interior walls, but those were created by the artist Djuro Radulovic much later after the church had been constructed, between 1980 and 1983. An interesting bit of trivia is that bones of many Serbian soldiers who fell defending Belgrade between 1914 and 1915 were discovered when the foundations for the church were being dug. The remains were respectfully moved to the ossuary beneath Jaksic’s tower which was specially built for that purpose. 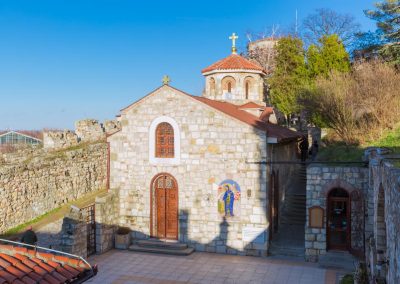