Today reputed to be one of the largest Orthodox churches in the world, the St. Sava’s Temple stands on the Vracar plateau in the center of Belgrade. This location is extremely important for the history of the temple because this was where the remains of the founder of Serbian Orthodox church, Saint Sava, were burned publicly by Ottoman Grand Vizier Sinan Pasha. Today one of the most monumental buildings in Belgrade’s cityscape, the temple had an incredibly long construction period.

The construction didn’t begin until a staggering 40 years after the initial plans and concepts for it had been made. The construction then officially began on 10th of May in 1935 – yes, you read that right. The project went on another indefinite hold after WWII Axis invasion of Yugoslavia in 1941 and then resumed again in 1958. It was a monumental undertaking for a war-recovering country.

One of the largest challenges was lifting the central dome on top of the building. It was built on the site, along with its copper plate and cross and it weighed around 4000 tons. The lifting of the cross alone lasted for 40 days. The construction continued, heavily assisted by public donations, and was mostly complete by the year 2009, after over 74 years. The inside of the temple is still largely unfinished regarding icons and decorations and is still being worked on today.

Today the temple stands as a monument both to its patron-saint and the remarkable perseverance that went into its construction throughout all the wars and misfortunes that delayed it. For some people the construction of the temple was their entire lifetime and even before the church was completed the construction site was a religious gathering place of sorts where people stopped by and lit candles, wishing the best for their loved ones. 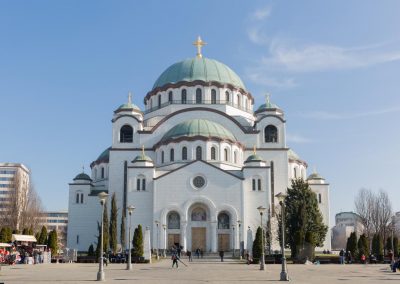 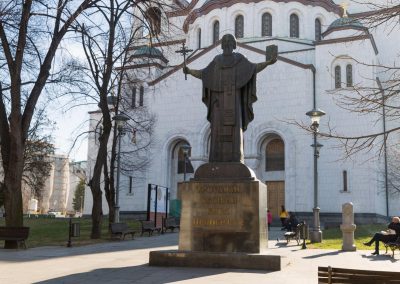